a few reasons i don't like my school:
1) it smells like a movie theater. a great smell for a movie theater...odd for a college. it smells this way because they are always popping popcorn. again. i know you're thinking "i wish.." no. stop. you don't wish. it's odd.
2) i don't know that more teal and purple could have fit into a building. it's as if you've stepped into some horrid dream circa 1990 and you can't ever seem to leave.
3) i feel as if i am in college day care.
4) the bathrooms smell WAY worse than any bathroom in any school i've ever attended.
5) i have been there for almost 2 years now, and i still get lost...it's not big, it's mostly as if you are in a very badly put together maze...with lots of teal and purple.
6) there are no windows in my classrooms. my high school didn't have windows either. honestly...who's against the window? really...is there someone out there sitting around thinking of what would be the best environment, the one most conducive to learning and they thought "OH, a windowless world of teal and purple! THAT will get these kids thinking!"
7) it is located in the suburbia of suburbia land. it's nowhere.

however, i have learned that i really do like chemistry. honestly. it is now 2:50am and i just finished doing my chemistry homework (not because of procrastination, simply bad timing..only got it yesterday) but i was enjoying it....enjoying it and surprised when i looked at the clock that it was almost 3 am (i was lost in the fun). i could sit about doing chemistry all day long and i would enjoy it. everything fits into nice neat boxes, it follows clear rules, you sit around and manipulate and manipulate and then WHALA! perfect. incredibly satisfying.
also we're supposed to get a blizzard tonight? my A&P teacher who never speaks to me, and i'm not sure knows my name informed me of this when i walked in the door tonight. first thing the man's ever said to me. odder than odd. but hey, y'know, i've got that.

and humm...i'm not sure you've met my cousin MRS. ANNE C. GROVES! it was beautiful. pictures and stories to come.
for now....i'll leave you with the teal and purple popcorn suburbia, chemistry loving and a blizzard. i mean, what else is there really? and i'm not spell checking...it's begun to depress me once again.

Posted by Jules Oldroyd at 2:47 AM 7 comments 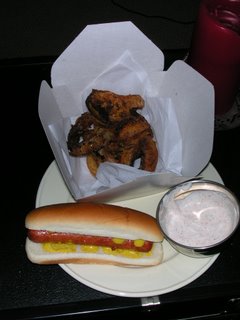 ...because sometimes you need a really good meal. i made homemade onion rings with a blue cheese/cayenne pepper sauce, and a hot dog with mustard. ohh man, it was good. i had to go with this picture because the camera battery died. the whole thing was made and consumed within 45 minutes...now on to the endless hours of studying.

pictures from our walk 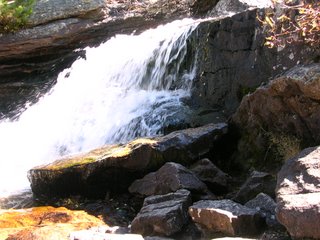 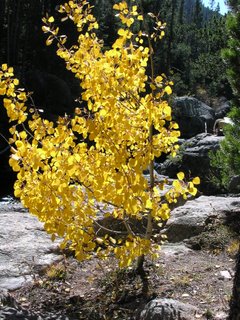 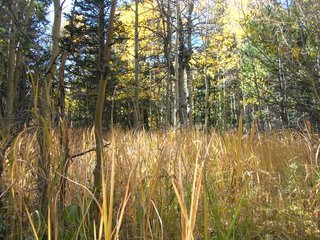 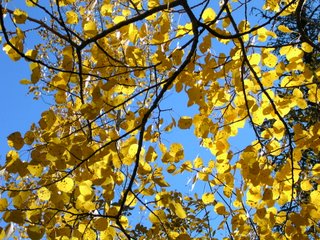 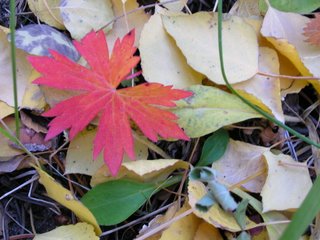 on mondays, wednesday and thrusday sean has to get up at 600am to leave the house between 700 & 730 to catch the bus down to denver. i try on most of these mornings to get up with him as well even though on mondays and wednesdays i don't have class until 300pm. but i figure "this will be good...i'll get things done...i'll have a morning...i love the morning." alas...mostly i fail at waking up with him, but i usually get up about the time he's leaving. this morning however was a whole different bunch of bananas.
i woke up between 500 & 545am (i never looked at a clock) but i woke up to a HUGE and incredibly loud crashing and banging sound in the bathroom. which startled both sean and i. apparently sean thought that i had fallen on my way to the bathroom (not that i've ever done that before) and so in response (he tells me hours later) he wanted to make sure i was okay, he wanted to check that i was still in bed. so literally maybe 2 seconds after the horrible crash awakening (heart still beating quickly...and still very sleepy) sean swings his arm over and hits me straight in the face. all i could say was, "ugh." and sean immediately starts apologizing profusely and without stopping, "i'm sorry, i'm sorry, i'm sorry, i'm sorry, i'm sorry..." almost as if he has no power to stop himself from apologizing. he couldn't stop saying it.
so after the whole hub-ub i settle down and try to get back to sleep....to no avail. to top it all of...now i have to get up and go to the bathroom. return to bed...still can't sleep. sean of course is totally passed out. i lie there for a bit and then alarms start going off...and finally sean gets up to go shower. and i think, "i'll just try and sleep for a few hours more." and then the cat outside starts scratching the glass on the door with his claws, which makes kenna whimper and stare at me...ENOUGH. i was awake.
get up, feed the cat, make coffee...drink some orange juice. eat breakfast and sit down to watch a bit of the today show. sean leaves around 730 and i lie down on the couch for "just 30 minutes" i tell myself. i awake at 1000am...alas, the second wake up.
here's to the day!

however. here's what i saw out our front door when i opened it to feed the cat and let the dog out....not so bad. 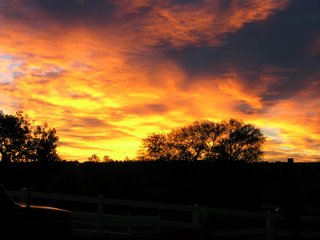