Sunday Afternoons & Walks in the City 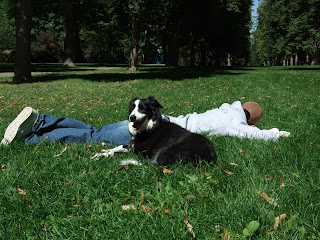 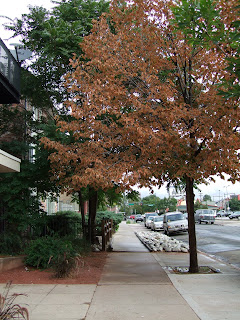 I woke up this morning to the sound of cars wooshing through rainy streets, and thought, "awww yea!" Morning tea, cinnamon sugar toast, hot shower, scarf, jacket - it was a good morning. While walking to the bus stop I passed this tree and my heart skipped a little - it's fall. Not only did it feel like fall, with the brisk 40-something degrees we were sporting outside, but the trees (I mean tree... in the singular - obviously, hence the photo) had gotten the memo. The only fleeting blemish on this morning? No chai. Hopefully the snow can hold off long enough for me to get my festive autumnal self in shape. Seriously now, it would have been movie-esque if only I had had that damn chai.
This evening as Kenna and I took a walk around the neighborhood, and as my nose and cheeks turned just a little bit pink, I could smell wood burning in fireplaces and it made me smile and inhale deeply (those festive carcinogens!). It's supposed to be 80 degrees or something similarly horrid this weekend, but for now I'll live in a world where summer has ended because it is no longer August. September has come and it's time for fall, give it up summer - nobody likes you anymore, move on.

Posted by Jules Oldroyd at 9:33 PM

oooh the norton! which one? i had a love/hate relationship with the norton. jd and i both kept ours... they sit in storage in bakersfield, but we wish they were with us here.

More pictures please - your apartment, your front walkway, your street, your nearby coffee stop, restaurant, etc.

"the tree had gotten the memo"

Beautiful! You write like Walt Disney used to draw. Everything comes to life and has it's own persona.

For Disney, cups had faces and knives had legs and arms. Your tree gets a memo. :-) Nice.